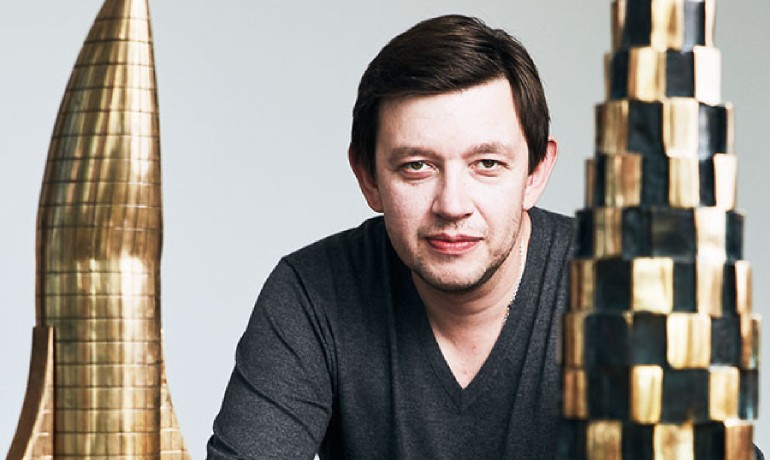 Vasily was born on March 3, 1976 in Moscow, Russia. His father Vasily Klyukin Sr. is a writer, historian and Doctor of Historical Sciences, his mother Elena is an editor and teacher.

Klyukin is a Russian businessman and co-founder of Sovcombank, a commercial bank. He manages real estate fund K2H, is keen on architecture and organized Stars-Bridge, a group for the support of the Russian contemporary art (which held worldwide exhibitions of Andrei Sharov in Moscow, Miami, Paris and Monaco). Since 2011, Stars-Bridge has held Art Nocturnal, an annual nighttime exhibition in Monte Carlo’s Japanese stone garden.

The first potential space tourist from Monaco, Vasily purchased «the trip into space» lot at the AmFar charity auction. The flight will take place at the beginning of 2015 in a spaceship belonging to Virgin Galactic, a Richard Branson-owned corporation. Klyukin graduated from the Finance Academy under the Government of the Russian Federation in Moscow in 1998. Subsequently Vasily obtained appraiser and auditor’s diplomas and a FCSM certificate. From 1994, Vasily worked in small corporations and banks.

He began his banking career with a cashier’s position in ASB-Agro bank in 1996. In 2003, along with his brother and other partners, Vasily acquired Buycombank.The bank was renamed to Sovcombank and its head office was moved to the city of Kostroma. Between 2001 and 2010 Sovcombank became one of the Russian’s top hundred banks.

Since 2007, engaged in real estate and property development.

From 2009, Vasily was involved in finishing off construction projects that had been frozen during the crisis; the Well House on Leninsky Prospect and portions of Federation Tower. In 2009 Vasily created and realized the concept of private micro-offices (office spaces from 20 meters).

Since 2010, Vasily has been engaged in architecture and design. He had released his architectural album «Designing Legends».

Klyukin plans to use his experience and implement a development project in Monaco on the basis of his own designs. He lives in Monaco. Has three children. Married to Anna Klyukin.

Vasily made news worldwide as the first potential space tourist from Monaco after purchasing the opportunity at an AmfAR Charity Auction during the Cannes Festival. The future Virgin Galactic flight through Richard Branson’s corporation, will be alongside actor Leonardo DiCaprio. The auction was dedicated to AIDS Research.

Pursuing the property development activities, Klyukin became highly interested in architecture and building designs. Klyukin’s main idea – is the pronounced individuality and the unique shape of his buildings, in order to make each building internationally recognizable and, as a consequence, one of the symbols of the city, or even the country. Klyukin believes that every building, in addition to its concept, should also have its own story, or legend. A famous building is much more commercially attractive, and, at the same time, a complex form or facade doesn’t involve a huge rise in costs. The status of a fashionable and famous tower or building brings very substantial dividends to its owner. V. Klyukin: “The buildings are the face of the city. The extraordinary buildings benefit the city and beautify it for centuries. By achieving the status of “fashionable”, the famous building brings the significant dividends to its developer as well”.

In late 2013, the Italian publishing house Skira published the 300-page coffee table book “Designing Legends” which contained 50 of his concepts for future towers, office buildings, museums and opera houses. Vasily was invited to hold autograph sessions around the world, including the New York Rizzoli store and during the London Freeze.

In August 2014, the signing of the first contract for the construction was announced – White Sails Hospital & Spa inTunisia Economic City (TEC).The company from Saudi Arabia, Lalei Al Barakah Est., will become the investor of this project. The project became instantly famous worldwide thanks to the attractive design.

Klyukin supports various charities and on the 400th anniversary of the Romanov dynasty by Duchess Maria Alexandrovna, he was awarded a medal for his regular participation in charitable activities.

He is also fond of sculpture and held his first professional exhibition in 2013.

The Stars-Bridge group, founded by Klyukin, supports the development of the Russian Contemporary Art, in particular held the series of worldwide exhibitions of the artist Andrei Sharov.